There are two ways to understand what CorTexT Manager is. The first one is to look at what has been achieved in terms of methods, tools and therefore lines of code. The second one is studied below, by analyzing (here with CorTexT Manager) what academic users have published using… CorTexT Manager.

Our study of the productions which mentioned the use of CorText Manager!

To analyse the scientific production that mentioned the use of CorTexT Manager, we have collected from different bibliographical search engines (Scopus, WOS…), from google and google scholar and from websites of some conferences (STI, EASST, EUSPRI), all documents (publications, reports, conference proceedings, books…) containing the terms “CorText Manager”, “CorText.net”, “CorTexT platform” and “Plateforme Cortext”. We then carried out various analyses, also using CorTexT Manager, by working on the authors, and on the terms and the places extracted from the titles and the abstracts of the documents. Through these analyses, we seek to understand how the scientific production that used CorTexT Manager has evolved and to characterise it (Who used CorTexT Manager? On which subjects do the productions focus? What are the fields of study of the productions? What sources of data did the authors work on and what methods did they mention?).

Over the period 2012 to 2021, we considered 223 documents that were written by 531 authors (workshops were not taken into account in this analysis). This represents just under 10% of the total number of users. Academic production has increased over the years (follow this page to see the documents considered and to appreciate the evolution of the production over the years): the last two years (2020 and 2021) gather 40% of the number of documents of the whole period.

Who is publishing with CorTexT Manager? *

After 2017, the structure of the collaboration network changed significantly: the map shows a majority of clusters grouping together few documents, independent of each other. Thus, the map does not highlight large networks of authors who collaborate with several on a regular basis, but rather a set of authors who use the platform occasionally working on one or more documents for the period covered. However, there are some clusters of authors associated with at least four documents. Among these, we still find members of LISIS, but we also observe the emergence of user communities in many other research environments and in other countries than France: for example, De La Salle University in Philippines, Wuhan University in China, State University of Maringá in Brazil, UniLaSalle Beauvais, other INRAE entities in France…

On which subjects do the productions which use CorTexT Manager focus? What are the places and the fields of study mentioned in the documents?

This figure represents the map of cooccurrences of the terms corresponding to the subjects which were extracted from the titles and the abstracts of the documents. For each cluster, the 5 most frequently mentioned places have been added. The map highlights two major pools of studies:

The rest of the map is fragmented, it shows 11 other clusters that group together mostly few documents. These clusters cover a wide range of topics as shown by the two most central terms of each cluster (ex: biorefiniey and biowaste; medicine; traffic safety…). Concerning the place, they are also very varied, even within the same cluster.

In conclusion and looking at the temporal distribution of topics as well as the elements shown above, the documents published by CorTexT Manager users deal with a wide variety of topics.

What sources of data did the authors work on and what methods did they mention?

This figure represents the heterogeneous map of cooccurrences of the extracted terms corresponding to the data and the methods mentioned in the titles and abstracts of the documents. The aim is to see which methodological framework has been mobilised in the documents studied and whether specific methods are used for certain types of data. The vocabulary found in the documents is very diverse: different terms are used to describe similar concepts, which can be found in different clusters. However, some trends can be identified.

Finally, we found two more little clusters, one dealing with the study of parliamentary texts and debates, and one on political discourse, online information and digital traces.

* Information to the authors (GDPR regarding the maps) 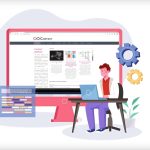