Pulseweb project is a joint project of CorText along with Global Pulse (UNO initiative) and ISC-PIF.

We analyzed every articles related to food security issues in the French media ( 22.000 articles from the national and local press extracted from the Factiva database). Text mining and network analysis tools were applied to identify the main framings for food security at each time period. Geo-location of articles have been used to map the spatial distribution of these framings.

In addition, we have implemented a dynamic reconstruction of these framings that allows to track their dynamics: emergence, disappearance, bifurcation, merging. We have also developed a dedicated representation that turns coherent framings into tubes and make it possible to visualize the dynamics of competition between frames: how they gain or lose popularity, get closer or more remote from each other, etc..

How important is climate change in the food security problems? Does biotechnology have a growing role in the discussions? What was the impact of the financial crisis on the media coverage of food insecurity?, etc.. An online interface allows to answer these questions by articulating the global dynamics of framings, their lexical content, and articles.

Our reconstruction showed that the framing of the issue can be divided into three major periods since 2004. During the first period until 2008, the issue of food insecurity arises primarily as a consequence of local humanitarian crisis caused by natural disasters or armed conflicts. In the second period (2008-2010) the international financial crisis and riots result in a significant re-configuration of the landscape with an emphasis on the issue of poverty and the need to manage food safety through the international institutions. From 2010, there was again a restructuring of the problem of food insecurity which is then framed as a source of political unrest in the Magrehb and the Mashreq.

These results and a more detailed version of the application are accessible in the white paper and on the project website where you will find the live pulseweb interface. 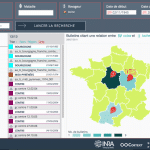